How viral videos are created and our Top Tiger tips! 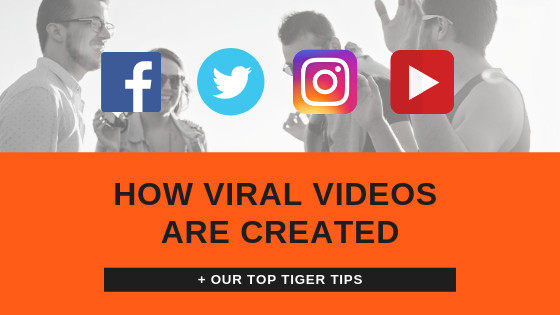 What is going viral?

Something that “goes viral” is defined as an image, video, or link that spreads rapidly through a population by being frequently shared with a number of individuals in a short space of time.

If we wrote a blog and it was read by 500,000 people, but it takes 5 years to do so that is an interesting, excellent blog BUT it’s not viral.

If, however it was read by 500,000 in 5 hours it would certainly be classed as going viral, you know that a piece of content has gone viral when everyone is talking about it, it’s on the news, in the newspapers, on the radio and trending on all social media platforms.

Why is it so difficult to achieve viral status?

Why does something go viral?

There is a whole host of reasons a piece of content could go viral but most of the time it’s a mixture of certain factors.

This shows that certain content may only go viral when it’s on a certain platform and being seen by a specific audience type.

What do they all have in common?

Video is the prominent type of content to go Viral. See the below HubSpot stats to see why:

What has gone viral in the past, do you remember these?

What is it? A hand signal challenge where you put your finger around your eye
When did it go viral? 15 August 2018
What triggered it go viral? Dele Alli using this as a celebration after scoring a goal, he then posted a video tutorial on Instagram
How long did it last? Just over a week
Stats/Numbers: His Instagram went viral with 1.2 million likes and 22,000 comments

What is it? A video trend where the participants performed flailing or convulsive movements
When did it go viral? February 2013
What triggered it to go viral? A group of 5 teenagers recreated a video with the track this became a meme. The meme gained popularity which then helped it on the billboard top 40 which made it go viral
How long did it last? Less than a month from February 2013 to March 2013
Stats/Numbers: By February 15th 40,000 spin off videos had been made, and 40 days after the upload on March 24th Harlem shake hit the 1 billion view mark

What is it? The dab is a dance move which involves moving your arms
When did it go viral? Summer 2015
What triggered it to go viral? Celebrities such as Migos, Jason Derulo and Kippa Da Flip incorporated this dance into their music videos as well as Derulo showing James Corden how to dab in Car Pool Karaoke helping kick off the viral trend.
How long did it last? The dab as a viral trend lasted around 3 months but today it is used both as a dance move and a statement
Stats/Numbers: Video of Cam Newton NFL player one of the ambassadors for the dance dabbing has amassed over 8 million views and Migos’ ‘Look at my dab’ has received 44 million views

What is it? It’s a dance created by Russell Horning, AKA backpack kid
When did it go viral? It went viral in May 2017
What triggered it to go viral? It went viral after he appeared on Saturday night live with Katy Perry, he had originally uploaded a video of him ‘Flossing’ in 2016 but this projected him to stardom
How long did it last? It lasted for around 6 months, but its popularity has picked up again after Russell sued the game Fortnite for using his dance in their game
Stats/Numbers: ‘Backpack kids’ appearance on Saturday Night Live has over 56 million views on YouTube and his own song ‘Flossin’ has received over 10 million views

What is it? A video in which people remain frozen in action like mannequins while a moving camera films them, often with the song “Black Beatles playing in the background
When did it go viral? November 2016
What triggered it to go viral? The song originally by Rae Sremmurd increased in popularity when people started sharing their challenges. Rae Sremmurd caught wind of this and completed their own mannequin challenge on stage at their concert. James Corden also completed one on the Late Show.
How long did it last? The trend lasted around 3 months with a host of celebrities posting their own
Stats/Numbers: Black Beatles has over 725 million views due to the popularity of the mannequin challenge

What is it? The dress is a photograph that became a viral internet sensation when viewers disagreed over whether the dress pictured was coloured black and blue, or white and gold
When did it go viral? February 2015
What triggered it to go viral? The controversy behind which colour people saw as it varied amongst friends and family, Buzzfeed caught on pretty quickly and posted on their sites which led to further engagement with the picture
How long did it last? This trend only lasted a few weeks as there was not any additional content that could have been created, once people had seen the picture there was nothing else for them to post
Stats/Numbers: At its peak, more than 670,000 people were simultaneously viewing Buzzfeed’s post

There’s no specific blueprint for success, but here’s our Top Tiger Tips

If you’d like any advice or inspiration with producing ROARsome content and ensuring it is seen and shared as widely as possible, please call us on 01903 237 002 or drop us a PM here. We’d love to help you ROAR!
* TikTok is a Chinese music video platform created in September 2016. This app allows users to watch music clips, shoot short videos as long as 60 seconds, edit them, and add special effects to them. It was the world’s most downloaded app in the first quarter of 2018 with an estimated 45.8 million downloads.

Why pay for one marketer when you can have a full team?

Get in touch if you want to be heard
This website uses cookies for core functionality. It also uses analytics cookies to allow us to see how the site is used. The cookies do not identify you. If you continue to use this site we will assume that you are happy with this. If you would like to know more please read our privacy policy.